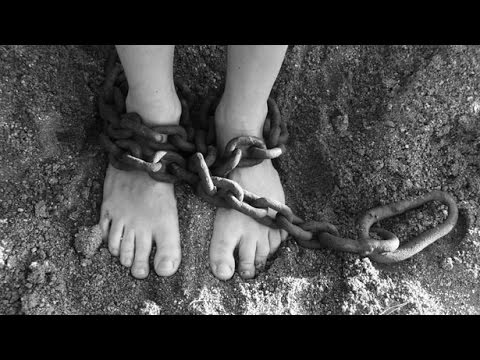 This is a vision I received whilst praying in the Spirit during the praise and worship part of my church’s service.

I saw myself underwater in the ocean. There I saw many people bound by chains. Their bodies were floating with the current in the water but their feet were bound with chains to the ground. They looked grey and lifeless, likes corpses floating in the water, but I knew that they were still alive. They were just being imprisoned under the ocean.

I started to pray for their release. As I prayed, sharks appeared far off in front of me, and started swimming zealously towards me. In fear I swam up to the surface of the water, climbed in a rowing boat that was there (where did it come from?) and rowed to shore. This is the same shore as the shore that was in the vision of the sleeping Christians. I know this because in both visions there was a rocky mountain with a cross at it’s peak. It is always dark on this beach.

I kneeled down on the sand, put my hand in the water and continued to pray in the Spirit. I wanted to do something for those captives I had seen, but on safer ground. As I prayed, I saw balls of light shooting down from the sky into the ocean. I was given the understanding that these were angels being released into the depths of the ocean to rescue the prisoners. I then understood that sometimes, it isn’t our job to do the actual rescuing, but rather to support the rescue mission with INTERCESSORY PRAYER, which gives God the authority to move.

In the vision, I did not know if the captives were Christians. Unlike the inactive Christians in the previous vision who were asleep on the boats (by choice), these were Christians who were being held captive by the enemy and being prevented from being active in their God-given ministries. I only understood this afterwards.

To learn more about Intercessory prayer, please check out this link.

What is intercessory prayer

The church needs more intercessors to rise up and pray for people, for churches and the whole body of Christ, for cities and countries. People who will cry out to God and proclaim “May Your kingdom come! May Your will be done on earth, as it is in heaven!” And Christians whose eyes have already been opened, must intercess for our brothers and sisters, that they will be set free in the spiritual realm, so that they can be active in their ministries and services for our Lord Jesus Christ here on earth, lest the Master should come back and they are not serving his kingdom.

42 And the Lord said, “Who then is that faithful and wise steward, whom his master will make ruler over his household, to give them their portion of food in due season? 43 Blessed is that servant whom his master will find so doing when he comes. 44 Truly, I say to you that he will make him ruler over all that he has. 45 But if that servant says in his heart, ‘My master is delaying his coming,’ and begins to beat the male and female servants, and to eat and drink and be drunk, 46 the master of that servant will come on a day when he is not looking for him, and at an hour when he is not aware, and will cut him in two and appoint him his portion with the unbelievers. 47 And that servant who knew his master’s will, and did not prepare himself or do according to his will, shall be beaten with many stripes. 48 But he who did not know, yet committed things deserving of stripes, shall be beaten with few. For everyone to whom much is given, from him much will be required; and to whom much has been committed, of him they will ask the more.

One thought on “Prisoners under the Ocean”